“I was born to live in the Adirondacks.” 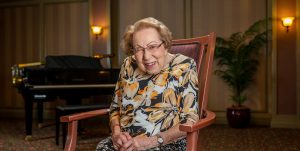 It is our pleasure to introduce Mrs. June Weiskotten, resident in Meadowbrook’s Limited Assistance neighborhood. The first word that comes to mind when thinking of this wonderful woman is ‘special.’ June spreads happiness and joy wherever she goes and has lived her life in this way. She charms every person that has the opportunity to know her. And now, you get to know her too. June is 93 years old, born on February 21, 1926. She was born in Washington, D.C. which is where she lived until her teen years. “I remember that on Easter, we could walk right up to the front door of the White House and go and enjoy the Easter egg hunt in the backyard.” Her father, Emil, worked for the government (according to June he was a ‘numbers guy’), and her mother, Elsie Schrage, was a typesetter.

“I remember we lived in an apartment, and I had made a new friend.” June said. “She was black, but I just never cared about that stuff.” Her parents eventually bought a beautiful brick home in D.C., and one day June ventured out to make new friends in her neighborhood. She ended up finding a street very close to her own which was where representatives from other countries and their families lived. “Language was never a problem for us; kids just play.”

When June was seven when her brother was born. They weren’t as close because of the age gap, but they always kept in touch and would exchange cards and regular phone calls. He passed away in 2004. Her family moved to Haddonfield, NJ in her teens, and she stayed in Haddonfield until she met her husband, Richard Weiskotten. His father was a Lutheran minister, and Richard followed in his father’s footsteps.

“The Lutheran church was looking for a minister.” June said. June sang in the church choir, and Richard set his sight on her. June married Richard when she was 19. “Girls just got married when they were 19!”

As a Lutheran minister, Richard’s profession caused them to move around a bit. They spent time in different parts of NY, including Long Island. But their favorite spot, was their time at their family cabin in Willsboro. June fondly shares the story that the first time she stepped off the train to visit Richard’s family cabin she realized she “was born to live in the Adirondacks”.

June and Richard had 2 children, Beth, and David. In her early 40s, when her kids left college, June decided to go to college herself. “My kids were very proud of me.” She said. “They would laugh and say that they were going to college along their mother. June studied Speech Therapy in college and went on to earn her Master’s degree in Speech Therapy and became employed by New York State.

Richard passed away in 1985. “He was such a wonderful father and husband. I would marry him all over again.”

“Around that time June received a promotion at work and moved to take it in the Plattsburgh area, returning to her love of the Adirondacks. She purchased her home in 1987 and loved entertaining her friends and family. In 1999 she retired from the state and worked part-time at a clothing store, which she enjoyed.

Along with fashion, June was and is passionate about dancing. For many years, She did ballroom dancing, and was a member of the North Country Squares. “I took every dance class I could. Tap dancing, line dancing…as long as I was getting to dance, I didn’t care.” To this day June still loves music and dance and enjoys the music that comes into Meadowbrook along with many other things.

When we asked June if she liked living at Meadowbrook, her response was glowing. “The people here, the staff…they are everything.” She gushed. “Everyone is so good to me.”

In her younger years, June would twirl across the dance floor. Though she can no longer dance, her lively spirit and caring nature have stayed with her and she continues to bring joy to the people around her. Thank you for letting us tell your story, June.