John Demarse is a very strong man.  He worked on his family farm and a potato farm, lifting 50 pound bags of potatoes as if they were bags of cotton. He was a talented woodworker, and was in charge of maintenance at Beekmantown Central School. He used to lift his wife, Ducy over his head as if she weighed nothing. John Demarse was a strong man.

As I sit across from him now, I can still see the strength in his presence. His doting daughter, Joy sits next to him looking lovingly at her father. Though he is now 93 years old, he still is every bit that strong and protective father she knows.

We all have a story to share, which is why the Age-in-Place Project is so important. John wasn’t always strong physically, it’s his mental strength that made him the man he is today.

John came into this world on February 10, 1926. Born in Churubusco, he was the second oldest of 12 kids. “My mother was a saint, my father was a grouch.” He said with a sly smile.  When he was five years old he contracted polio. The poliovirus attacked his foot and after seven years his right foot was misshapen, requiring surgery to make a more normally shaped foot. In 1938 he was admitted into the Mary McClellan Hospital in Cambridge, NY for twenty weeks. “His foot was twisting so they cut the tendons so they could maintain a more normal shape.” Joy said. Recovery from such a surgery was no easy feat, but John never let him slow him down.

When he returned home he went right back to working on the farm with his father. “I never babied my leg; I got along very good.” Though he did experience his fair share of taunting from the kids at school. “They would call me crippled or peg-leg.” He said. “Kids can be cruel.”

John never allowed the polio and its impact on his foot and leg define him or hold him back.  What he lacked in strength in his leg, he compensated for with the hard work and perseverance.  He worked hard on his father’s farm, but equally as hard at school. He graduated from high school early, at the age of 17 with a Regents diploma. Despite his love of academics, his family couldn’t finance his college education.  After graduation he took a full-time job working for the Gagnier Potato Farm during the days, and at night he’d work on his family farm.

In 1953, John met the love of his life, Grace.  “Everybody called her Ducy.” John said. Apparently, Ducy’s mom had a strong dislike for her mother-in-law, who was also named Grace. So to avoid the reminder, she took a name Ducy from a romance novel and that was that!  Ducy and John were married in 1954 and had two daughters, Joy and Jill. 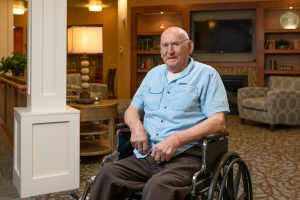 “I never remember him not being there.” Joy said. Despite the fact that John worked six days per week, 10 hours each day.  “He was always there to tuck us in at bedtime. Sundays were a very special day; we’d go to church, get an ice cream. He always planted a garden and included us in that.” She continued. “He always made it fun.”

“I remember once, in my early teenage years, when I was going through a cynical stage, I asked my dad why he wasn’t angry because polio had closed so many doors to him.” Joy said. “His answer stuck with me. He said ‘I was one of the lucky ones.  I didn’t have to go into an iron lung. I’m not paralyzed’.” Joy said that this response stuck with her and has shaped the way she tries to live her life, to see the positives before the negatives.

John ended his career at the potato farm in 1967; he had passed a civil service exam for Custodial Worker and began his role in Custodian at Beekmantown Central School; after several years he took another exam for Maintenance and moved into that role for the remainder of his career.  The knowledge and physical strength he acquired from years of working on a farm translated well in regard to tending to the school district. “I knew that school like the back of my hand.” Even after John retired, the administration would ask him to return to “break in the new guys.”

John lost Ducy after more than 50 years of marriage.  “She was a heavy smoker.” John said. Ducy had suffered from a stroke in the late 90’s, and though she recovered she was never really quite the same.  In the last 18 months of her life, John cared for his wife day and night. She passed away 2006.

After Ducy passed, John committed much of his time to his daughters and their families.  Joy said that even though John wasn’t able to attend college himself, that he never gave his daughters a choice in the matter. They both attended SUNY Plattsburgh; Jill taught Chemistry at Plattsburgh High School and Joy went on to McGill University to get her Doctorate in Integrated Studies, Education and Administration.  She taught English at Plattsburgh High School for 35 ½ years. “When I got my first classroom, my dad made me bookcases, shelves and a podium; he was an excellent woodworker.”

John had open heart surgery in 2008 from which he fully recovered. The day before Thanksgiving 2018, he fell and broke his hip, which led to surgery at CVPH Medical Center, then rehabilitation at Meadowbrook.  After 100 days in rehabilitation, he was transferred up to his new home on the second floor of Meadowbrook in our Chestnut Grove neighborhood.

The charming Mr. Demarse is a beloved member of the Meadowbrook family.  As we sat together to talk about his life, we were interrupted numerous times by the staff, who would walk by and give him a hug, or a rub of the shoulders.  When you ask John how’s he’s doing, he always responds with a warm eyes and a big smile….