“You can’t just sit in your own house, eat your own food and keep your own money. We must give ourselves to other people.” ~Joe Swinyer

If you don’t know Joe, you will know him or at least a little about his life after reading this. Joe was selected to participate in the Age-in-Place Project which features residents of our nursing home, bringing to light the beauty in aging and the wonderful opportunity to learn from folks that have lived in our world through so many different changes. His story, all 77 years (so far)….is one about giving to others. 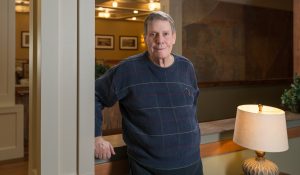 Joe has been a north country resident his entire life. He was born in 1941 at the Saranac Lake General Hospital.  His mother, Agnes Finnegan-Swinyer was a school teacher in a one-room schoolhouse where she taught eight different grades. She was a no-nonsense person with a strong personality, which Joe said “was necessary to keep order in the schoolhouse”. His father, Gordon Swinyer was an auto mechanic.  He had a very close relationship with his parents, he remembered them giving him large birthday parties where all of his cousins and neighborhood friends would be invited.

As Joe grew older, he has always maintained a high level of determination to achieve his goals.  In 1958 he attended SUNY Plattsburgh and four years later, earned a Bachelor of Science in Education.  His first job was in one of the last one-room schoolhouses in Keeses Mills (near Paul Smith’s College) where he taught for two years before accepting a position as Librarian in the SUNY Plattsburgh Library.  He loved this position, he got to meet people, and he simply enjoyed the work. He stayed at the Library for 31 years.

It was in 1978 that Joe’s life would change forever. He met his life partner, Larry Hart and fell in love.  Larry was the manager of the Canata Lodge at Port Kent when they met; he lived in Cadyville and was well-known and beloved by the entire community. “He was a perfectionist.” Joe said. “He always wanted everything to be just right, including our relationship.” Joe reminisced that they would never leave the house without kissing each other goodbye.

Being a gay couple in 1978,  one would assume that they must’ve experienced bias or judgement. But luckily, they experienced none of that. Larry was so popular in his community that he and Joe were never seen in any way other than as a loving couple.

Sadly, in 2005 Joe lost his partner of 27 years.  Larry was diagnosed with prostate cancer that metastasized to his spine by the time they caught it. Larry maintained his active lifestyle and the couple took it day-by-day.  “Larry was going to the grocery store two weeks before he died.”

“At Larry’s funeral, everyone from Cadyville was there.” Larry had retired before Joe, and during his retirement he would walk two miles everyday throughout Cadyville. “He knew everybody and everybody loved him.”

Joe persevered with the determination that he is known for. He decided to keep himself busy and went back to work. This time, he got to travel and worked as a consultant for NYS Archives.  He visited libraries, historical societies and historical houses from Oswego County to Clinton County, recommending to the folks working there how to properly preserve and make accessible their historical records (letters, journals, diaries). He enjoyed meeting people and his life-long love of learning kept him in this position until 2012.

While working for the NYS Archives, Joe also decided it was time to give more to his community. He became one of the first Palliative Care volunteers at CVPH Medical Center, working alongside nurses to help with the delicate end-of-life needs the patients would have.  He was able to be a calm and compassionate for so many; he would talk with them, sit with them or pray with them if they asked him to. “I believe that life is a continuum and we are here now, but we are going to be with The Almighty, whoever or whatever that may be to each of us, after we die.” Joe said. “They are leaving this world to go to another and no one should have to be alone.”  Joe also volunteered for Hospice of the North Country, offering the support of Palliative Care and companionship to so many patients.

We’ve not mentioned yet is that Joe is very passionate about his faith, Catholicism.  It has always been a major part of his life, playing organ and singing in churches throughout the north country.  Now, he is a very active member of St. Peter’s Church and he attends Mass as much as possible. He was the Hospitality Committee chairperson and organized events that St. Peter’s Church held.

In 2012, Joe was diagnosed with a very serious prostate cancer diagnosis, just as Larry had been. However, he it was discovered and removed. Joe has been cancer free since 2014. Another setback for our friend Joe, and what brought him to Meadowbrook, was when he fell in 2018 and broke his hip. He has been a resident in our Aspen View neighborhood since September 2018.

But remember, Joe Swinyer is determined. Everyday he spends on this earth, he continues to give back to his community and the people surrounding him.  For example, a resident here is the mother of one of our staff members. Sadly, this resident has dementia, and she is unable to recognize members of her family. Joe is a close friend of the family; and each day he speaks to the resident and will report to her daughter with happy little tidbits about her mother’s time here. The daughter then shares Joe’s reports with her family.  Joe said she didn’t remember his name at first, but remembered that she knew him. “The other day, she walked by my room and yelled ‘Joe!’ It was the most wonderful thing.”

Joe has really enjoyed his time here at Meadowbrook. He asked specifically to give a shout-out to the 3-11 shift on Aspen View.  “The CNA’s and nurses are excellent. They are attentive, polite and courteous.” He said. “They really care for us.”

Determined. Caring. Compassionate. That is Joe Swinyer. He is so much more; when Joe’s life ends here on earth, his gifts will keep on giving to the people that know him or have been helped by him.