First and foremost, to tell this particular story was more difficult than the previous stories we’ve shared. Joe, Mary, June and Larry’s stories were easy to write and share because it was easy for them to share personal things about themselves. Ms. Verda Waterhouse, our next Age-In-Place Project participant, was different. 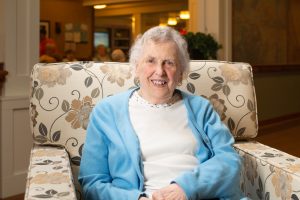 You see, Ms. Waterhouse is probably one of the warmest and friendliest individuals I’ve come across. Always “bright-eyed and bushy-tailed” as my mom used to say, she greets you with a smile and laughs easily, but when it came to asking her about her life, she was a tad more guarded. So, with her permission, we did a little investigating and reached out to her son, David Waterhouse, who is an career-long English teacher at Ausable Valley Central School. He helped us fill in some of the gaps and allowed me to bring Verda’s true personality to light. We will share some of what David said about his mother in her story; his words were so moving and representative of a child who really loves his mother.

Let’s rewind for a moment. Starting at the beginning eighty-five years ago, Verda was born in Guelph, Ontario, to her father Walter and Bessie Nichols. Her mother was a homemaker all of her life, caring for Verda and her brother and sister. Her father owned his own print shop where he printed wedding invitations, books, magazines and pamphlets. “He enjoyed his work,” Verda said. “He ran that business until he retired.”

“We didn’t travel when I was a child.” Many of Verda’s relatives lived in Toronto, so the only trips they would take would be to visit family. Verda smiled when she recalled her group of girlfriends, whom she spent so much time with as a teen. She and her friends would enjoy playing basketball, ice skating, roller skating and going to hockey games. She is still a big hockey fan and roots for the Toronto Maple Leafs. When she turned seventeen, she remembers taking a cross-country bus trip to British Columbia with one of her girlfriends: “We had such a wonderful time.”

Verda stayed in Guelph until she was twenty, then moving to Washington state with her boyfriend, whom she had been dating for quite some time. She hopped on an airplane and headed to Pullman, Washington. She and her boyfriend were married and stayed in Pullman for approximately six years, which is where their first child was born in 1956, Karen.

Her husband was offered a position at SUNY Plattsburgh in 1960, and they packed up and moved. Shortly after moving, Verda had two boys, Adam and David born in 1962 & ‘64. For many years, Verda was a homemaker, working occasionally as the secretary at the Episcopal Church, and also a member of several committees.

In 1980, Verda and her husband divorced. “My mother took on the job of raising two teenage boys after her divorce, and she did it with such grace and love,” her youngest son, David, said. “She expected us to always be the best we could be, and she was there for us whenever we needed her. Raising two teenagers came with many challenges, but she never backed down from any of them.”

As a single mom of three, she immediately went out to seek employment. She ended up at CVPH Medical Center working as a volunteer but then was interviewed for the position of Secretary of the Nursing Department. She was offered that position and stayed there for the next eighteen years, retiring in 1998. “I loved this job; it kept me busy, and I like to be busy.”

David shared that he and his sister and brother knew that Verda was a constant for them. “We never doubted that we had an anchor, and that meant everything.”

Verda got the bug for traveling, particularly after retiring. However, just before retiring, Verda took a two-week trip to England, and immediately after her retirement, she continued her exploration and traveled to San Diego, St. John, the Maritime provinces and Aspen.

Life brings twists and turns, as we all know, and Verda was no exception. Three short years after retiring, she went to her doctor for a check-up, and they discovered a lump on her breast. In 2001, Verda was diagnosed with breast cancer and had to undergo chemotherapy and radiation for a year. “The treatments were hard, but you just do what you have to do.”

“She faced cancer bravely as she remained focused on her family; she never allowed it to take away her fun-loving spirit,” David added.

Fortunately, after a year of treatment, Verda was proclaimed cancer-free in 2002, which undoubtedly has made her even stronger of a woman, which is why she handled the diagnosis of rheumatoid arthritis with equally as much zest. After trying medicine to ease the side effects of the arthritis, she soon realized it wasn’t helping. In 2008 & ’09, she had both hips replaced due to the arthritis.

As I sit across from her in her suite at Meadowbrook, she shared with me how the rheumatoid arthritis would flare up now and again but that she always managed it. Even this she says with a pleasant smile on her face. David said that his mom “always finds joy in everything.”

“Mom has always enjoyed the simple things that life has had to offer, whether it be a drive around the lake in which she takes in the beautiful scenery or chatting away with friends and family. She exudes happiness in everything she does.”

David is as proud of his mom as she is of each of her children. Her daughter, Karen, was an orthopedic nurse on R6 at CVPH and, according to Verda, “was the best orthopedic nurse they ever had.” Her son Adam graduated from SUNY Oswego and ended up in the science department at Plainedge High School; he is retired but still coaches tennis in Farmingdale. As mentioned earlier, her youngest is a career-long English teacher after graduating from SUNY Plattsburgh. Verda is also the proud grandma of four and great grandma of one.

Verda decided to become a resident at Meadowbrook in our Limited Assistance/Restorative Neighborhood in October 2018. “I didn’t want my kids to worry about me,” she said. “I feel safe here; I know if I need anything, I’ll be taken care of.”

Thank you, Verda, for letting us inside of your world. What’s more is that we got to see you in a whole new light through the eyes of your son. And before we end your story, there is just one more thing David had to say: “Even as a fifty-five- year-old man, I know that Mom is there for me whenever I need her. I value her advice and appreciate her wisdom. She is my hero.”